I’ve been terrible about updating this. I’ve just been too lazy to really figure out how to use it. That’s why most people have seen me plastering Facebook with pictures of various things, but I should probably learn to contain it all here so that everyone doesn’t have to be subjected to my nonsense. I’ve actually been making a lot of things lately, so I have some things to post.

One of the things that I’m really excited about is our CSA. It stands for Community Supported Agriculture. Basically, we paid a flat fee when we signed up a few months ago. Starting last week, every week, we pick up a share of produce directly from a farmer. The share consists of whatever he’s able to harvest that week. Hubby and I LOVE our veggies, so we’ve both been pretty excited. Last week’s share contained 1 head of bibb lettuce, 1 head of red leaf lettuce, 1 bunch of mizuna, 1 bunch of pea tendrils, 1 bunch of spinach, 1 bunch of chicory, 1 bunch of Red Russian kale, and 1 head of bok choy. It was overwhelming to first figure out how to fit everything into the refrigerator, and then figure out how to use it all.

Aside from a couple of great salads, our first meal using CSA veggies was a stir-fry made with tofu, shiitake mushrooms, pea tendrils, 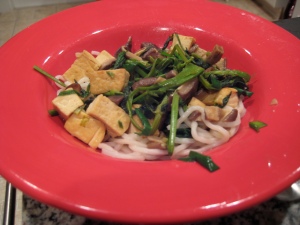 and fresh Asian noodles. Honestly, it didn’t quite hit the mark. The pea tendrils were tougher than we expected. I don’t know if we needed to trim them differently or cook them differently or what, but it didn’t quite work. Also, the flavors that I added in of sesame oil, soy sauce, garlic, and ginger, kind of overpowered the delicate flavors of the pea tendrils. The next night, we added some bok choi to it, and we enjoyed it more.

The mizuna was a bit of a challenge as I had never heard of it before. It is a delic 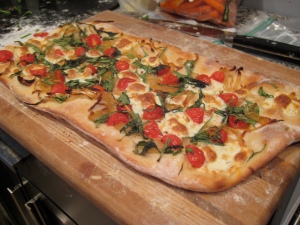 ate Asian green that is often compared to arugula due to its slightly peppery quality. After a string of Asian-inspired dishes, I was ready for a change, so I decided to try the mizuna on pizza, knowing that there are plenty of pizzas out there that use arugula. The first night, I bought pizza dough from the Shaws supermarket right down the street. This pizza had: garlic, caramelized onions, mizuna, grape tomatoes, and fresh mozzarella. It was generally pretty good, but a little on the dry side.

The next night, I decided to try it again with some changes. I decided to make my own dough, using a recipe that I found on the Pete Bakes blog, originally from Peter Reinhart’s

The Bread Baker’s Apprentice, which, by the way, I think I may need to purchase. I love bread! Honestly, I don’t know if it came out the way that it was supposed to. The dough was extremely delicate and the resulting crust was a little too crunchy, but generally not bad. I decided to replace the tomatoes with black mission figs, add some fontina cheese and drizzle it all with a balsamic reduction.