Things are busy around here. Hubs has been job hunting for the past couple of months, which has involved lots of meet-ups and networking events.  I’ve had regular evening clients at the gym, along with work to do for my dietetics program. To ensure that we have reasonably nutritious dinners, it has become even more important to plan our meals, stock up on groceries, and make dinners that will last more than one night. Combinations of protein, vegetables, and whole grains tend to fit the bill, providing a variety of nutrients, and acting as a palette for herbs and spices. I’m going to explain the thought process in case anyone out there is trying to figure out how to develop a recipe. 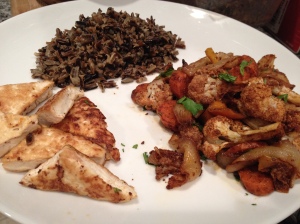 When planning a meal, I usually start with a general idea, and then decide on the specifics as I go along. In this case, I decided on tofu, wild rice, and roasted vegetables. I then decided on cauliflower and carrots, based on textures, flavors, and nutrients. Carrots and cumin are often paired together, which evolved into the decision to use Moroccan spices with the vegetables. I turned to Yotam Ottolenghi’s book Plenty for ideas, and I ended up adapting the flavors used in his “Spicy Moroccan Carrot Salad.” I was dry-frying the tofu while the vegetables were roasting, and I decided that some acidity was needed to balance out the sweet, spicy flavors of the vegetables, so I went with fresh lemon juice on the tofu. Honestly, I wasn’t sure if it was going to work, but it totally did. Sure, I could have done more with the tofu, but I was trying to keep it simple for a weeknight. I tried to find a decent photo of the meal, but I couldn’t. I’m a terrible photographer. You will just have to take my word for it that it is delicious.

Preheat oven to 375°F. Prepare wild rice, or grain of your choice, according to the package directions. While the rice is cooking, drain the water from the tofu, wrap the tofu in a clean kitchen towel or paper towels, and place a bowl or other weight on top to gently squeeze out excess water. While the tofu is pressing, begin preparing the vegetables. Combine the dried spices in a small bowl. Chop the vegetables (excluding cilantro) into bite-sized pieces and place into a shallow baking pan. Drizzle the olive oil over the vegetables, mix to combine, add the spices, and mix again. Cook for approximately 30 minutes, stirring the vegetables halfway through. 10 minutes before the vegetables are done, heat a nonstick frying pan over medium heat. It is VERY important to use a nonstick pan for this cooking method since you are not using any oil. Remove the towels from the tofu,  slice the tofu into small triangles or rectangles, and place into the frying pan in a single layer. Cook on one side for about 5 minutes, gently pressing down on each piece with a spatula. Once the tofu is golden brown on the bottom, flip over, and cook on the other side for another 5 minutes, or until golden brown. Lower the heat to “low,” and squeeze lemon juice over the tofu, stirring to coat. Serve with wild rice and vegetables, and garnish vegetables with fresh cilantro.

I’ve been terrible about updating this. I’ve just been too lazy to really figure out how to use it. That’s why most people have seen me plastering Facebook with pictures of various things, but I should probably learn to contain it all here so that everyone doesn’t have to be subjected to my nonsense. I’ve actually been making a lot of things lately, so I have some things to post.

One of the things that I’m really excited about is our CSA. It stands for Community Supported Agriculture. Basically, we paid a flat fee when we signed up a few months ago. Starting last week, every week, we pick up a share of produce directly from a farmer. The share consists of whatever he’s able to harvest that week. Hubby and I LOVE our veggies, so we’ve both been pretty excited. Last week’s share contained 1 head of bibb lettuce, 1 head of red leaf lettuce, 1 bunch of mizuna, 1 bunch of pea tendrils, 1 bunch of spinach, 1 bunch of chicory, 1 bunch of Red Russian kale, and 1 head of bok choy. It was overwhelming to first figure out how to fit everything into the refrigerator, and then figure out how to use it all.

Aside from a couple of great salads, our first meal using CSA veggies was a stir-fry made with tofu, shiitake mushrooms, pea tendrils,

and fresh Asian noodles. Honestly, it didn’t quite hit the mark. The pea tendrils were tougher than we expected. I don’t know if we needed to trim them differently or cook them differently or what, but it didn’t quite work. Also, the flavors that I added in of sesame oil, soy sauce, garlic, and ginger, kind of overpowered the delicate flavors of the pea tendrils. The next night, we added some bok choi to it, and we enjoyed it more.

The mizuna was a bit of a challenge as I had never heard of it before. It is a delic

ate Asian green that is often compared to arugula due to its slightly peppery quality. After a string of Asian-inspired dishes, I was ready for a change, so I decided to try the mizuna on pizza, knowing that there are plenty of pizzas out there that use arugula. The first night, I bought pizza dough from the Shaws supermarket right down the street. This pizza had: garlic, caramelized onions, mizuna, grape tomatoes, and fresh mozzarella. It was generally pretty good, but a little on the dry side.

The next night, I decided to try it again with some changes. I decided to make my own dough, using a recipe that I found on the Pete Bakes blog, originally from Peter Reinhart’s

The Bread Baker’s Apprentice, which, by the way, I think I may need to purchase. I love bread! Honestly, I don’t know if it came out the way that it was supposed to. The dough was extremely delicate and the resulting crust was a little too crunchy, but generally not bad. I decided to replace the tomatoes with black mission figs, add some fontina cheese and drizzle it all with a balsamic reduction.